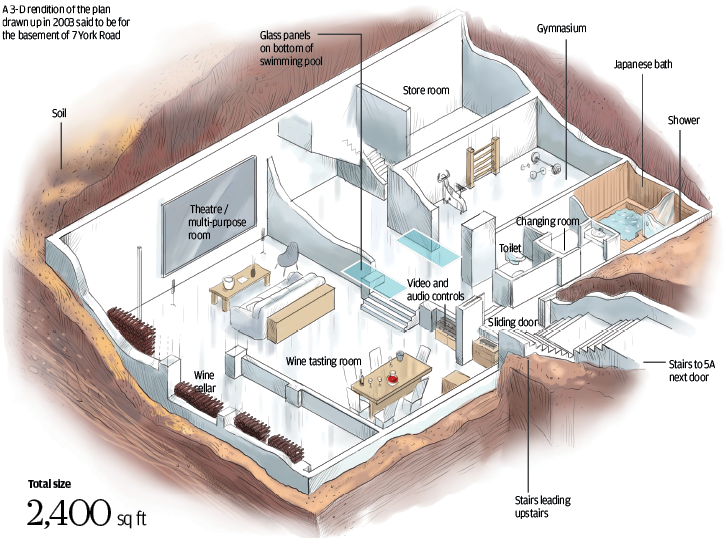 This is a story about Hong Kong’s Housing Authority, the election for the city’s Chief Executive (mayor of Hong Kong) and a cheated wife who bites the bullet for her husband. It has all the features of a Chinese drama, except that in a Chinese drama everyone dies at the end. Here, the wife is just accused as being the culprit in an illegal housing construction….

So where shall we start our story? How about Hong Kong’s Housing Authority? That might sound boring (and it is) so I shall keep it as short as possible. Hong Kong’s home to massive high-rises where as much human flesh as possible is crammed into 40 sqm shoe boxes. However, there are also  “Village Houses” that are built in areas classified as villages and belonging to an extended family. Within villages, houses are allowed to be a maximum of three floors (including ground floor). This rule, however, is normally ignored. I’m living in a village in Hong Kong and the majority of houses have an unofficial fourth floor. This can be just an additional roof and a barbecue area. But sometimes, it’s a proper fourth floor.

Hong Kong’s government is enforcing the rules now and wants to demolish all these illegal structures. There has been quite some discussion about this topic over the last few months in the local media. Hong Kong’s Chief Executive, Donald Tsang, has urged all government officials to make sure they don’t live or own a structure with an illegal construction. It seems, not everyone got the message though.

Enter Hong Kong’s Chief Executive Election. Hong Kong’s “CEO” is “elected” once every five years. I used inverted commas as it’s not really an election in a democratic sense. He’s elected by an assembly of businessmen, tycoons and trade union representatives. A few people here and there are also thrown into for good measure (and to make sure it looks that every part of Hong Kong’s population is adequately represented). By having this system, Hong Kong’s daddy (Beijing) assures that the guy/girl they choose to run Hong Kong will end up on the post.

The top candidates this time are:

On top of that there are additional candidates which I won’t mention as they’re not too important at this stage. Wikipedia has an article on the election here if you’re interested.

So far, the race seems to be between Mr Tang and Mr Leung. The former seems to be favored by Hong Kong’s business community, the latter by the general public. It’s not hard to see why. Mr Tang is coming from a well-established family with political and business ties in Hong Kong and China. As such, he is considered to keep Hong Kong’s business friendly stance and low taxes.

Mr Leung couldn’t be more different. He’s son of a policeman and made his fortune with his own surveyor company that he sold to DTZ Debenham Tie Leung (the “Leung” in the company name is his name). On top of that,  CY looks like the typical “nice Chinese uncle”. He’s generally liked by the public and makes a better appearance compared to Henry.

Enter the race and the mud digging: Last October, Mr Tang admitted of having had an extra marital affair. Well, no surprise there. It seems that every second Hong Kong guy has a second wife over the border in Shenzhen (I recommend to read Shard’s of China’s blog for more on that topic). The public outrage seemed to have been limited.

But now, Mr Tang seems to be in real trouble. In Hong Kong, a city that is proud to be operated by the “rule of law”, it seems he just ignored this. Henry lives in a house with an illegal construction.

What seems a trivial matter in other countries is a serious affair in Hong Kong where housing is a big topic. Part of the reason is that the majority in Hong Kong simply cannot afford one. What will get you a nice, brick house and a garden in Europe will buy a 400sq ft. shoebox here. So where does Henry live?

He lives in a mansion (a cottage by European standards, but here it’s considered a mansion). His wife and he bought the house together a few years ago. 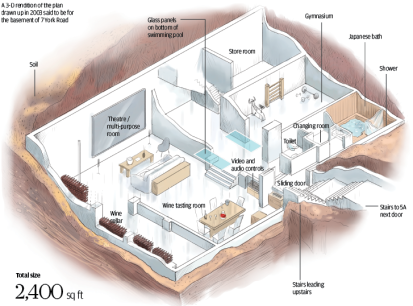 When the house was purchased it didn’t include a basement. Now, miraculously a basement stretching over 2,400 sq.ft including a wine testing room, wine cellar, and much more has appeared. The photo on the left, published in the South China Morning Post illustrates what can be found allegedly underneath his house.

“No big deal”, you might think. But the problem is, that you need a permission to dig a basement under your house. And given the quality of housing in the city and the high building concentration it is with good reason that these laws exist. Mr Tang, though, chose to ignore it.

And now, there is a huge uproar in Hong Kong. Why did Henry Tang not inform the public earlier about this illegal structure? Why did he choose to ignore his previous boss, Donald Tsang’s, warning that every public official should make sure not to live in a house with an illegal structure?

Well, the public was given the answers yesterday. Mr. Tang said that since 2010 the house has belonged to his wife. The illegal structure was her idea and he knew it was illegal but he chose to kept quiet due to the issues they faced in their marriage (he was cheating on her). It seems that he wasn’t able to communicate with her during the time, hence he chose to kept silent.

So Mr Tang first chooses to cheat on his wife and later blames her for an illegal structure found under her house? It’s hard to believe that Henry didn’t benefit from the basement. A gym, japanese bath and wine testing room? And you never used it? Come on!

I keep asking myself how this guy will handle all the serious challenges he will face as being Hong Kong’s Chief Executive. He can’t even properly handle this incident and needs to blame his wife.

I think it’s time for him to stand down and let CY run Hong Kong.

4 thoughts on “I’m innocent – it was my wife! A story of Hong Kong’s pathetic politicians…”