I hopped over to Macau for the weekend to enjoy some fantastic Portuguese seafood. Most people who come to for a visit Hong Kong only stay in the former British colony. Unfortunately they don’t make it over to Macau, but it’s worth a visit. Simply a day tour to Macau is enough to see most of what the former Portuguese colony has in stock.

The ferry to Macau leaves every 15 minutes, 24 hours day and night. After one hour you arrive at the ferry terminal in Macau and realize the difference between a former Portuguese and former British colony.

Hong Kong’s the most efficient place on earth. Whether you order food in a restaurant, want to set up your own business or just clear immigration. Macau, no surprise, is different. As it’s colonial rulers, Macau seems to take a bit longer. It is less “pro business”, everything takes a bit longer and it’s also not as modern compared to Hong Kong. I experienced lines in front of the  immigration even unheard of in China. Count at least half an hour for the immigration before you can start exploring the city.

Macau’s a great deal older compared to Hong Kong. Hong Kong had been a British colony from 1842 to 1997 (with a quick interruption of the Japanese taking over during the Second World War). Macau’s had been under Portuguese influence from 1552, although it only became a colony in the 1880s after Portugal saw Hong Kong becoming British. While the city flourished in the 17th and 18th century, the 19th century saw it’s demise starting when Hong Kong was set up. Until then, Portugal was the only road into China. All merchants had to reside there to conduct the China trade. But with Hong Kong falling in British hands this advantage ceased to exist.

Today, Macau has one advantages over Hong Kong and the rest of China. Gambling. Yes, this former little backwater village is more than twice as big as Last Vegas in terms of gambling turnover. Up to 2001, a Chinese billionaire, Stanley Ho, held the monopoly on gambling. Not anymore. All the big Vegas casinos have set up shop here with multi-billion structures that make Vegas look like a village. So if you like gambling, Macau is the place to be. And since Chinese love gambling, Macau is awash with hot money flowing in from over the border. That keeps the government’s revenue high, and the resident’s taxes low.

But Macau also holds enough attractions apart from gambling. It is certainly worth a day trip from Hong Kong.

Having arrived at Macau and cleared immigration take bus number 3 to the city centre and enjoy the Mediterranean architecture. The Portuguese influence is clearly obvious in the architecture everywhere. As a side note: Macau has its own currency but you can use Hong Kong dollar as well as the local currency. So don’t even bother to change your money when coming from Hong Kong. The casinos only accept Hong Kong dollars though.

Compared to Hong Kong’s steel and glass skyscrapers, Macau has a more laid back atmosphere. If Hong Kong’s a small place, Macau is really tiny. It’s just about 20 square kilometers, and only because of recent massive land reclamation efforts. Without these, Macau would still be around 15 square kilometers.

Most tourist attractions (apart from the casinos) are located on the northern island called – no surprise – Macau. The other two islands in the south – Taipa and Coloane – are almost becoming one island due to land filling measures currently undertaken and are home to massive casino developments.

Start at the city centre and explore a few of the little back streets. You’ll find some nice cafes and Portuguese Restaurants with fantastic seafood. Follow the signs to St. Dominics church and try some green tea ice cream on the way. Also, don’t miss out on one of Macau’s specialty, the “Pork Chop Bun”. You’ll find it on various street stalls for as little as HKD 15.

Follow the signs to the “Ruin’s of St. Paul”. This UNESCO World Heritage is the facade of the former St. Paul’s church, built in the 16th century. It was built by Portuguese Jesuits and the largest church in Asia back at the time. Right next to Ruin’s of St. Paul is the Macau Museum, a small but fine museum which tells you about Macau’s history. You’ll only need around one to one and a half hours to walk through. From the top you’ll also have a brilliant view on Macau.

If you have time, hop on a bus  to Taipa Village – minibus 16 goes right there. Taipa’s old downtown area is great. Small town houses, laid back and fantastic food. Try the seafood in one of the many side streets and walk around the former villas near the sea. It’s worth it. 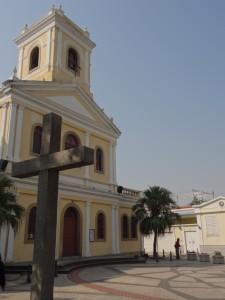 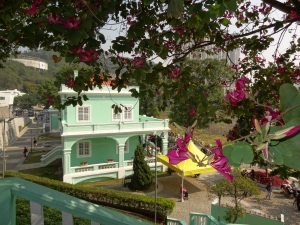 For dinner, take a bus or a taxi to “O Porto Interior Restaurant” on the southern tip of Macau island. Head to the A-Ma temple and the “Museo Maritimo”. If you have time, stop by these two. The museum is a must if you’re interested in maritime history (if you’re not, then skip it). Walking up the street you’ll see the restaurant on the right hand side. If you click on the link you can also just print out the website and hand it to a taxi driver.

After you sent a day in Macau, just take the ferry back to Hong Kong. No rush, as ferries are running 24 hours. Or, you could use some time and visit one of the casinos. The Venetian is highly recommended. They also have free shuttle buses from and to the ferry port.